August 27th was a monumental day. Not only was it Grandma Doris’ 78th birthday, but it was also my first first day of school in six years. I officially began my journey towards earning a Master of Fine Arts in Acting from Ohio University. They only accept 10 actors into their program every three years. The fact that I am a part of this class still amazes and inspires me to give thanks. I can’t say as I every imagined myself living in a college town in rural Ohio, but given the circumstances, I’m more than ok with it. The campus and surrounding areas are stunning and as the school was founded in 1804, the town its self has a lot of fantastic history and charm.

Before moving away, a very dear friend of mine (and MFA acting program survivor) shared a list of things I could expect from Grad School and one of them stood out. It was the ‘Cry Circle Touch’ phenomenon, in which during a class, someone would begin crying, be it from a breathing exercise, a stretch or whatever and the impulse would be for the class to circle around and give a consoling touch on the arm of the person crying. He warned that this would prove to become a habit for some and would inevitably last the entirety of the 3 year program. To which I rolled my eyes and said something to the effect of “Good lord. Not on my watch. Acting isn’t about crying!” He and I had a good laugh about it.

On my second day of school, we were in a movement class and guess who found herself crying on the floor? This girl. All I could think was “I don’t want to be the first Cry Circle Touch!!!”

Much to my relief, I’m now entering my 7th week of classes and I’ve seen everyone in my studio cry – some of us multiple times. Who knew getting an MFA in acting would be so Dramatic?

In other news, I finally feel as though I’ve fallen into a routine here in Athens. I know where to go for things like food, entertainment, football games and the like. One of my greatest challenges currently is not eating at a local joint called Big Mamma’s Burritos for lunch every day.

Some of the amazing things I’ve been able to do since school started include:

Teaching has been such an incredible and challenging experience, but one that I love. Watching the friendships forming in my class takes me back to freshman year at the U of M and our Fundamentals of The Performance class, where I learned so many great lessons and worked with people I still adore to this day. I told my students on the first day of class that it was my dream that when they all graduated, they would look back and remember this class as their favorite because of the fun they had and the friends that they made. I then also shared that winning an Oscar was my other dream, but that I was going to focus on the present, just for them. 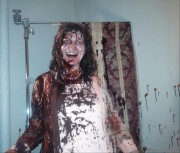 There are days when I miss home more than I can even comprehend at times. In those moments, I’ve begun reminding myself that home will always be there and each day this distance makes my heart grow fonder for Minneapolis. It’s really exciting to share stories about the theater scene and the people I love with this new circle of people in my life. I’ve done a fair share of encouraging people to head there after they graduate, especially the playwrights.

I’m astounded by how much has happened in just 7 weeks and am thrilled to see what more will happen over the next few years!